The story behind our “Peachy-Keen” Pie 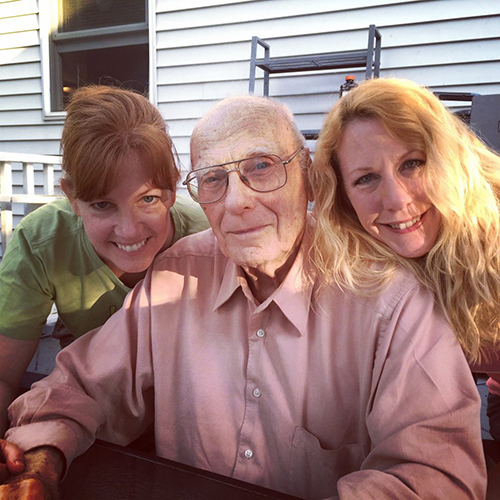 The story behind our “Peachy-Keen” Pie

Our dad, Rob Cotter, is an amazing man. While he’s been through a lot in his life, he has always maintained a sunny disposition. If you ask him how he is doing, 99% of the time, he will tell you he is “gingy peachy keen.” We say it’s his tagline. Not bad for a ninety-one-year-old. No doubt that positivity is the reason for his longevity. If you come in on Wednesday mornings, you’ll likely see him behind the counter, helping himself to a small cup of coffee and an apricot kolacky. We’re happy to sit with him and will ignore you if you come in. Sorry. Not Sorry.

Life is full of ups and downs. While we all know that to be true, our dad and his generation seemed to get more than their fair share of tough shakes. In 1934, Dad lost his mom at the age of seven from breast cancer (she was only 35). When she realized her fate, she told him to “be a brave soldier.” A few years later, he signed up for ROTC during WWII. At 19, he was on a freighter to Japan, when “Truman made the tough decision to drop the bomb”. Dad has said on many occasions, “if it weren’t for the nuclear bomb, you surely wouldn’t be here, as I was due to land on the beach in Japan that August.” Once home, he got a job at Pepsodent and soon after, bought his aunt and uncle a house in the bungalow district on the south side. Not bad for a twenty-something. Then, on to Swift & Company for the next 45 years. During that time, he survived many mergers and acquisitions, staying on as a manager of the Computer Information Systems department. It seems our dad was a non-negotiable contributor to his team. On the flip side, his personal life was probably more complicated than it should have been. He was married three times. Let’s just say, the third time was the charm for him.☺ Despite all of his trials and tribulations, he remained the guy that always saw the better side of life. He’s the inspiration for core value #3: “Generate Positive Energy.” What a legacy. What a guy.

We hope you celebrate your dad this weekend in the same spirit as we will. It’s great that we can name a pie after him, but please tell your dad (if you can) how much you love and appreciate him. Dads, in general, do not get enough credit for making us who we are. Father’s Day is this Sunday. Give that guy a smooch – and if you can – a piece of pie!

For general inquiries, email us at info@creativecakesbakery.com.

Sign up for the Creative Cakes Rewards Program & receive delish perks throughout the year!